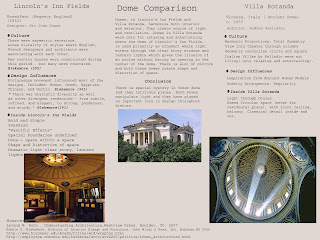 In IARc 222 class we had to do another comparison and I chose domes in two different period of times. I chose Lincoln's Inn Fields ( 1812, Regency England) and Villa Rotanda( 1557, Vicenza, Italy-Ancient Rome-). We have to explain the cultural context, design influences, and how the inside space is articulated. These domes both harmonize in interior and exterior. they create source of light and ventilation. Domes in Villa Rotanda were only for relaxing and entertaining where the dome of Lincoln's Inn Fields was used primarily as ornament were light enters through the clear story windows and lantern lights which gives the illusion of an oculus without  having an opening in the center of the dome. There is a lot of mirrors and both these domes create shape and distortion of space.

Conclusion
There is a spacial mystery in these domes and they intricate planes. Both domes manipulate light and they have played an important role in design throughout history.
1 comment:
Email ThisBlogThis!Share to TwitterShare to FacebookShare to Pinterest 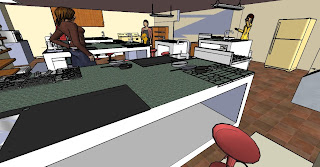 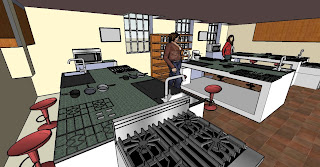 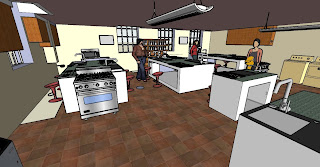 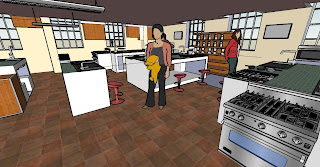 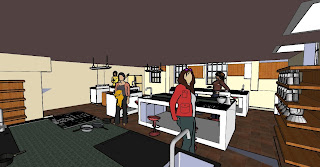 In the studio class we had to design a food's lab for the nutrition students at UNCG. The space had to be "green" and part of that process I chose sustainable materials such as linoleum,marmoleum flooring, energy star rated fixtures and appliances, counter tops, bamboo cabinets. I used to SketchUp to do the model. This was one of the project where there was a real client and many users of the space (students,teachers). We had many meeting where we did measurements of the space, spoke with the client and trying to figure out the needs that they had. I proposed this solution of how to utilize the space. The layout was simple, however, making use of every corner of the space was not easy. After presenting my schematic design, we did another meeting where we developed the idea a little more. Let me know if you any questions! I will gladly help and walk you through any steps where you might have problem with your kitchen design project ( or any project). We keep learning everyday and it is a process that does not stop.
1 comment:
Email ThisBlogThis!Share to TwitterShare to FacebookShare to Pinterest 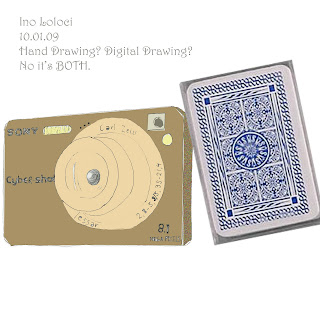 We created a black line drawing of a camera, showing a sense of scale and after we had to work our rendering magic in Photoshop. The final was to be printed on 8" x 8" paper. I decided to draw a camera and a deck of cards. This was a great example and practice for me to sharpen up on my hand drawing skills and digital at the same time. There were different textures that were applied and one can see depth every time they add new stuff to the drawings. Fist, I added the base colors ( brown on the camera and gray-blue at the deck of cards). Second, I added the details such as the flash on the camera and lines on the cards. It was an experience and I have learned that good things take time. What are some line drawings that you done?
1 comment:
Email ThisBlogThis!Share to TwitterShare to FacebookShare to Pinterest
Newer Posts Older Posts Home
Subscribe to: Posts (Atom)